When Steve McQueen raced in the BTCC

A number of 'outsiders' have made the odd appearance in the British Touring Car Championship over the years.

From F1 champion Nigel Mansell, to The Stig-turned James Bond double Ben Collins, and more recently soap star Kelvin Fletcher, the BTCC has welcomed a number of unexpected star entries. But once upon a time, the 'King of Cool' himself, Steve McQueen, raced in Britain's top motorsport category.

Turn the clock back to 1961. John Whitmore had already wrapped up the then-British Saloon Car Championship title, so in an October meeting at Brand Hatch he handed his Mini over to the American who would go on to become a Hollywood icon.

Although best known for his exploits on screen, McQueen was no stranger to the world of motorsport. He was a successful motorcycle racer and on four wheels he had been coached by Stirling Moss. He'd even made a one-off appearance in a club event at Oulton Park. This, however, was something more high-profile. 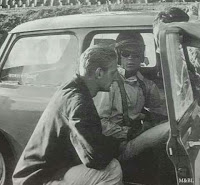 While in the UK filming The War Lover, McQueen met with Whitmore in a hotel in London. The pair, who went on to become good friends, discussed their love of cars in a meeting that would eventually lead to Whitmore stepping aside to allow McQueen to race at Brands Hatch.
The actor had never raced at the Kent circuit before, and the race he was entered in featured a host of contemporary big name drivers.

McQueen was one of several Mini drivers in the race and while the bigger-engined cars like the Jaguar Mk. II  held an advantage by virtue of their sheer grunt, the gaggle of Minis were putting on quite a show. McQueen, Vic Elford, Christabel Carlisle, Mick Clare and Kenny Lall all fought tooth and nail for much of the race.

Eventually Elford, Carlisle and McQueen found their way past Alan Fraser. His Sunbeam Rapier held a straight line advantage, but it was no match for the Minis when things got twisty.

Carlisle was at the front of the trio for much of the race but she was eventually passed by Elford, who himself had overtaken McQueen not long before. McQueen also made a last ditch attempt to get by Carlisle but it was to no avail. The trio eventually finished fifth, sixth, and seventh – first, second, and an impressive third for McQueen in class.

Such was the excitement of their on-track battle, they were invited to join race winner Mike Parkes on the podium by the impressed circuit commentator - they were even allowed to do a lap of honour in front of the adoring crowd.

McQueen only ever made a handful of racing appearances on British soil, with outings at Oulton Park, Brands Hatch, and Aintree all recorded. However, it was endurance racing exploits that would be his best-known appearances behind the wheel.

He raced at the 1970 12 Hours of Sebring with Peter Revson and despite wearing a cast on his leg because of a motorcycle accident in the build-up to the race, he was still able to win his class in a Porsche 908/02. The pair only missed out on overall victory by a narrow 23 seconds as Mario Andretti, Ignazio Giunti, and Nino Vaccarella took overall honours in their Ferrari.

That year he was set to compete at the 24 Hours of Le Mans in another Porsche while filming the cult classic based on the same race. However, he elected to withdraw when it became clear that backers for the film would pull their support if McQueen went ahead and competed. Regardless, he ended up spending most of that summer driving for the production anyway.

He also continued to race off-road on both two and four wheels into the 1970s and in 1978 he was inducted into the off-road motorsports hall of fame alongside fellow actor James Garner and Indianapolis 500 winner Parnelli Jones.

Email ThisBlogThis!Share to TwitterShare to FacebookShare to Pinterest
Labels: BTCC, Other